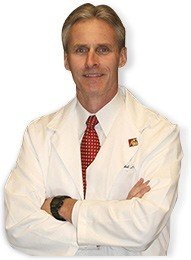 Dr. Michael Anderson has been practicing in St. George for more than 25 years making him the senior most orthopedic surgeon in all of Southern Utah. His special interest in hip and knee replacement surgery began early in his career while training at the University of Utah under the tutelage of some of the foremost pioneers in joint replacement surgery, Aaron Hofmann, M.D., Kent Samuelson, M.D., and Harold Dunn, M.D., just to name a few. Dr. Anderson is also the longest serving member of the American Association of Hip and Knee Surgeons (AAHKS) in Southern Utah. He is also certified by the American Board of Orthopaedic Surgery (ABOS).

For 15 years Dr. Anderson and his partners provided Sports Medicine coverage for Dixie State University and the local area high schools, donating time and expertise to keep the student athletes on the field and in the game. As a part of that service, knowledge and proficiency in the latest arthroscopic techniques of the knee and shoulder have been offered to the Washington County area athletes. Dr. Anderson continues to enjoy the ‘bread and butter’ of general orthopedics, hand surgery, carpal tunnel, trigger fingers etc., and the unpredictable challenge of trauma, piecing back together broken bones.

In the last year of medical school at the University of Utah, Dr. Anderson’s life focus broadened when his future wife, Kelly, walked through the door. Thirty years and 4 boys later they’ve made their home in Southern Utah. His love of the out of doors, climbing, cycling, and photography have filled the time not taken by his practice of medicine.

His training in orthopedic surgery has given him some unique opportunities including serving as the crew physician for an IMAX film in Antarctica documenting the travels of Ernest Shackleton in 1914, Shackleton’s Antarctic Adventure, as well as volunteer work in Third World countries.

I have a great passion for the practice of medicine and more specifically orthopedic surgery. From my earliest memories I have had the desire to become a doctor and now years later my love for the profession is still growing.

Similarly, it is hard to remember a time when I did not have a camera in my hands. The beauties of nature and the human body have always captivated and intrigued me.