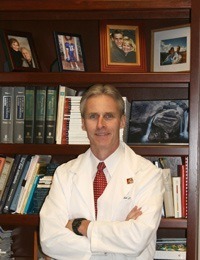 About 30 years ago, I happened to come across an article in the magazine Scientific American that described a relatively new orthopaedic procedure that was able to replace the worn out human knee. I had just started my college studies and was so fascinated with the idea of being able to replace the arthritic, worn out knee that I saved the magazine for years. Knee replacement, which was first performed in 1968, has turned out to be one of the most important orthopaedic surgical advances of the last century. Over the last 35 years, improvements in materials and techniques have greatly improved the outcomes and raised the expectations of the surgery. Almost 300,000 total knee replacements are performed each year in the United States. This is a two-part series of articles designed to provide information about knee replacement surgery.

Post-traumatic Arthritis: This type of arthritis occurs as a result of an injury to a major joint in which there is often an incongruity or an offset to the joint surface which results in a rapidly progressive arthritis of that joint.

Before considering total knee arthroplasty, it is important to realize that there are a number of things one can do to put off or avoid surgery. They fall into principally three categories, namely medications, activity modification, and bracing.

Medications: There are a host of very effective, relatively safe, non-steroidal anti-inflammatory medications which will often give very satisfactory relief of the pain of arthritis. Some of those common are Ibuprofen, also known as Advil and Motrin, etc. Another commonly used NSAID is Naprosyn, sold over the counter as Aleve. Some of the newer ones, such as Celebrex, are also very effective and may have fewer side effects than the traditional non-steroidal anti-inflammatories. As with all medications, it is important to consult your primary care physician before starting these medications at there may be medical reasons to avoid or not take a particular medication because of the side effect. A favorite combination that I have found works very well for the pain of arthritis is to take two Aleve (over the counter Naprosyn) pills in the morning and two at night in combination with one Extra Strength Tylenol taken at the same time. It has been my experience that this combination will provide better pain relief than either one individually, and can often give satisfactory relief.

Activity Modifications: Typically, cyclical weight-bearing activities such as jogging, tennis, and racquetball are not a good idea for the advanced arthritic knee. Modifications of those activities and replacement with either cycling, swimming, or other non-weight bearing exercises are generally a good idea. If a person has not tried using a cane in the opposite side hand, that frequently will give satisfactory relief and allow increased activities while using the cane.

Bracing: Frequently referred to as "unloader" braces, these are highly specialized braces that reduce pressure on a knee joint that has developed arthritic changes. These braces are supposed to change the angle of force across the knee relieving the arthritic pressure and give patients relief. In my experience, the braces are not real successful in the treatment of arthritis when it is advanced to the point that a person is having to change their activities.

Is Total Knee Replacement for You

The decisions of whether or not to have a total knee is a joint (no pun intended) decision between you the patient, your family, and the surgeon. From my perspective as a recommending surgeon, there are a number of factors that come in to play that I think are critical to be reviewed prior to considering a knee replacement.

1) When the arthritis has become so severe that unacceptable forced lifestyle changes have occurred and conservative management methods have been maximally utilized, then I feel that the consideration for a knee replacement is reasonable. That is, you spend more time than you would like in the chair rather than up walking and doing the activities you want to do and it is because of the pain in your knee.

2) Another factor which is an indicator that the time may be right is the periodic or frequent regular use of narcotics to take care of the pain of arthritis in the knee.

3) The last factor which comes from the physician’s side is the correlation with x-rays and physical exam to show that they are consistent with an arthritic process going on in the knee. If all of these factors are reviewed and satisfy the patient and the physician, then the likelihood of a good result from surgery is much higher.

The next article in the series will review the total knee replacement experience from the preoperative visit to the time in the hospital and the period of recovery following.